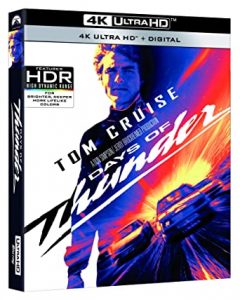 In the fast-paced world of NASCAR, a rivalry brews between rookie hotshot Cole Trickle (Tom Cruise) and veteran racer Rowdy Burns (Michael Rooker). When both of them are seriously injured in competition, the former bitter rivals become close friends. With Cole’s spirits restored by a romance with neurosurgeon Dr. Claire Lewicki (Nicole Kidman), and Rowdy still sidelined by injuries, Cole decides to race Rowdy’s car in the Daytona 500 against underhanded newcomer Russ Wheeler (Cary Elwes).

Days of Thunder doesn’t come with much in regards to special features. However the below features are included.

This is the first of three films to star both Cruise and Kidman (the other two being Far and Away and Eyes Wide Shut). The film received mixed reviews, with criticism aimed at its unrealistic special effects, characters, screenplay, acting, dialogue and similarities to Top Gun, but was widely praised for its action sequences, Hans Zimmer’s musical score, fast pace, and the performances of Cruise and Kidman. – wikipedia