Own ESCAPE ROOM:TOURNAMENT OF CHAMPIONS NOW! 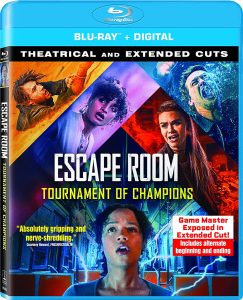 ESCAPE ROOM:TOURNAMENT OF CHAMPIONS is a very well done sequel in this newly established franchise. The first film I throughly enjoyed as it was a new take at the Saw films except not as gory and extreme. This series has a more modern approach to the fun Escape Room activities people are doing with their friends and family.

In this sequel it basically took off where the first film left off. Two players from the previous game on the hunt to discover who is behind all this terror. But of course, these people are not going to be found so easily and they end up in a new series of escape rooms along with other former winners.

Unlike the first film the player knew exactly what are the best clues and the time to execute the escape room in a quicker time seemed to be a drastic change. Because of this change in the games the movies seemed to fly by. It only had twenty minutes left in no time. But, films like this I feel like really hit the sweet spot at a 90 minute runtime.

The connections made in this feel seem to be a little more fast paced since they all were aware of the risks at every turn and the need to work with each other to hopefully escape the rooms safely.

This seems like the first of many sequels that can be adapted based of this story of Escape Room and personally I am all for it. Especially, when they release around the fall for some spooky horror/thriller film vibes.

The video on blu-ray is a 1080p quality and with the quality of detail put into every escape room you can really tell. The video quality had zero issues with noticing things in the scenes. Especially, when the main goal of the game is to notice fine details. The audio was also very clear. The film obviously has heavy dialogue more than anything else since they are all having to discuss theories and plans to escape and I had no issues hearing every word of dialogue.