We are planning some pretty awesome evening screenings as well. Like last year these will be separately ticketed events that are only open to MondoCon attendees. First up, we’re excited to announce a re-score of the film PIECES with Umberto (Matt Hill) performing live in the theater. Last year at MondoCon Umberto and Andton Maoif performed a re-score of THE TEXAS CHAINSAW MASSACRE and it blew everyone away. We knew we had to have him return for an encore performance at this year's MondoCon and expect this one to wow as much as last year. Every attendee at the screening will receive a FREE exclusive colorway of a new Umberto 7’ due on the Death Waltz jukebox series featuring two brand new unreleased tracks. We’ll also have copies of the Rock Action LP and Matt will be signing after the performance. 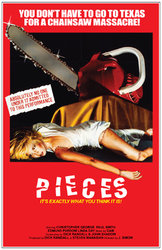 This will be pretty cool, I thought the movie was a good slasher!

Can't wait to experience my first film with a live score in the theater!
Reactions: tridon and digitalbabe

So last Sunday, @Wreck and I had the pleasure of viewing Umberto's final live re-score of the grindhouse slasher flick, PIECES. I just posted a review of the event here on the HDN home page. I hope you enjoy!

Great read. I loved the rescore. Lots of synths. I want to buy it badly but not sure if it's even for sell. @tridon
Reactions: tridon

Wreck said:
Great read. I loved the rescore. Lots of synths. I want to buy it badly but not sure if it's even for sell. @tridon
Click to expand...

They had a vinyl of the re-score for sale across from us at the booth all weekend, but I never bought it because I thought that's what we were getting. It was called Umberto: Night Has A Thousand Screams. It's sold out on his web store.

fudge! I need that! @tridon

Wreck said:
fudge! I need that! @tridon
Click to expand...

You and me both, man!
Show hidden low quality content