Ash has made a deal with Ruby for her to continue to hunt the deadites instead of him.  He thinks that he has outsmarted her but the joke is on him.  Ruby has summoned the deadites to find Ash.  He is in Jacksonville and he has to get back to his hometown.  He sill has his sidekicks Pablo & Kelly for the ride.  They’re ready to make a bloody mess on the road home where Ash isn’t considered a hero but a killer.

ASH VS. THE EVIL DEAD is a series on STARZ that is the ongoing story of Ash Williams.  He is the main character from the original three films and this series continues about 30 years after THE ARMY OF DARKNESS.

As I mentioned in the description, this picks up after the first season and pretty much jumps right back into it.  You get all the horror, the blood, and especially the laughs that the show provides.  Bruce Campbell is right at home playing Ash.  His character is more like Ash from ARMY OF DARKNESS with the jokes and quippy comebacks. The video is a 1080p AVC presentation with a really good transfer.  I would call the transfer “clean” but the people also have blood and grime as a part of their makeup that comes through very well.  Even on the close-ups, the details of the skewed, demon faces look excellent with no distortion on where the makeup ends.  There are demons, people covered in blood, and some very gross effects that aren’t missed.  Reds and blues are especially strong.  There are some daytime scenes but the show’s creators try to make the series look as creepy as possible.  This means that there are darker settings with the blacks in the images looking inky with sporadic contrasting hiccups. Some of the best examples for the blacks and contrasting while the crew is in the asylum.  You can see the detailing on the walls clearly with some good authoring. 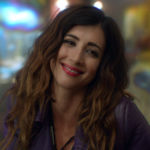 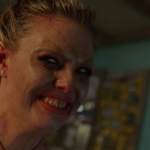 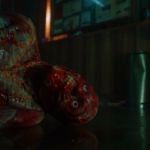 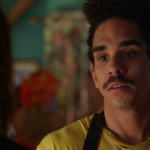 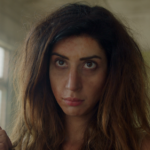 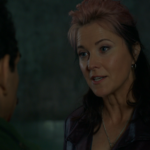 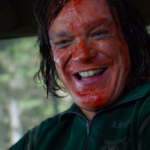 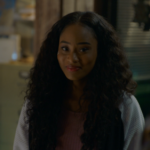 The audio is a lossless Dolby TrueHD 7.1 mix and man, is there a lot going on at one time,  I totally mean this in a good way.  The series has sound effects for the creatures and the weapons that Ash, Kelly, and Pablo use to mutate them.  Chainsaws as well as the guns work the system the most with every buzz and blast from the shotgun.  There are also some sick effects when someone is performing a spell and it effects the environment around them.  The sound field has a lot of movement from speaker to speaker.   Dialogue is also clear and prioritized well with the effects barrage. -Audio Commentary On the episode “The Morgue”: Executive Producer/Actor Bruce Campbell and Actors Dana DeLorenzo, Lucy Lawless, and Ray Santiago for “The Morgue”

-Season 2 First Look: This is a quick look at the season of the show.

-Inside the World of Ash vs. Evil Dead: These are recaps for the episodes.

-Up Your Ash: This looks at the scene and effects from the morgue.

-Women Who Kick Ash: This is a quick featurette of Ruby, Kelly, and Linda in the show.

-Puppets Are Cute: This is about the Ash puppet…the greatest character on the show.

-Dawn of the Spawn: This is a look at this new villain in the series.

-Bringing Henrietta Back: The return of a fan favorite.

-The Delta: Ash’s famous car and why it’s important in any Raimi production.

-How to Kill a Deadite: The production team and the actors discuss how to get things done in the world of deadites. ASH VS. THE EVIL DEAD is horrific with the comedy that you expect from Bruce Campbell.  He and his crew do justice to a series that I know some may have been skeptical about but the success of the series has easily proven them wrong.  I do think that having it on a premium channel helps because there is no way that they could get their vision on a channel with restrictions.  The Blu-ray looks awesome and the audio is strong as well.  There are a good amount of extras but they are all very short.  Overall, this is a must have for the EVIL DEAD and fans of the show.