About a week before the fall of the Berlin Wall, MI6 Agent Lorraine Broughton is sent into Wast Berlin to retrieve a list.  The list contains the information of every agent in Berlin and every agency in the western world is after it.  MI6 has an operative named David Percival in Berlin but he is starting to fit into the culture a little too well and Lorraine doesn’t know what to do about him.

ATOMIC BLONDE is the directorial debut from David Leitch.  The story is based on the graphic novel by Antony Johnston and Sam Hart named THE COLDEST CITY.  Leitch has done a ton of stunts and stunt choreography in (according to IMDB) 82 films.  This movie captures the feeling of the cold war in Germany at the time.  Anything from the west was prohibited and it was the time of spies.  The cinematography showed how cold Germany was with a lot of the scenery having a cool blue and drab colors at times.  Put that against the high contrast of the neon and you have a visually striking movie but I’ll get into that in a few paragraphs.  Charlize Theron plays the perfect spy who has been doing this long enough that she can read a situation with clarity.  She also did an amazing job at the her hand-to-hand combat skills she learned for the movie.  Of course, she has previous experience from other roles but this one sort of brought her into a new light.  Her character also played against the visuals of the various scenes.  Like her favorite drink, Stoli on the rocks: its simple, it can kick your ass at any moment, and its unforgiving.

As for McAvoy, this role wasn’t much of a stretch for him after his wild performances in X-MEN: DAYS OF FUTURE PAST and SPLIT.  Like Theron, he is such a complex actor and can play you like a cat that caught the canary.  You are never 100% sure of him or his intentions and that keeps him interesting. 4k UHD
The video is a 2160p HEVC presentation that looks incredible in 4k.  As I mentioned, this is a visually stunning film and can really draw you in deeply with the images on screen.  The details are everywhere and can be seen in the widest of shots or the tight closeups.  Some of the best examples are when Lorraine is getting a really good view of her bruises and abrasions on her body.  The same scene has her looking into a mirror after a really bad tussle and you see the end result.  As for the coloring, skin tones lack warmth and are sometimes purposely washed out.  Where the color really pops is the hotel room where Lorraine is staying in Germany.  The decorating has been done with a lot of neon hot pinks and blues.  With the HDR creating the inky blacks in the room, the glow just has an excellent feel to it.

Blu-ray
The transfer is a 1080p AVC presentation that has many of the positives from the 4k UHD review.  Even without the advantage of Dolby Vision, the dark spaces look inky and deep.  Shadows casted on the faces of the characters don’t drowned out the sharp images but help to define them.  Coloring on the Blu-ray is thoughtfully placed and they really stand out.  There is also a beautiful grain included that helps to keep the audience grounded in knowing how gritty life was here. 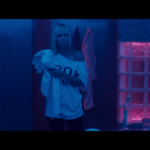 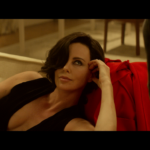 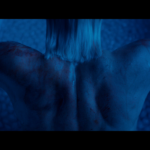 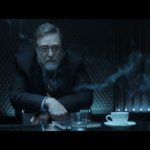 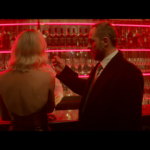 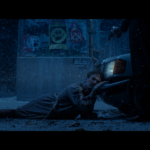 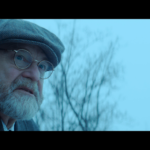 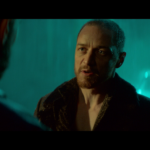 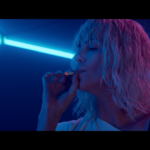 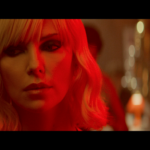 4k UHD
The audio for both formats is a DTS:X Master Audio mix that defaults to a DTS-HD Master Audio 7.1 mix.

Its smart to use the identical sound designs.  Pretty much from the jump, you get a hard-hitting, immersive experience.  The score and soundtrack also help with the immersion process by making some very good choices.  Like most 80’s songs, there is plenty of bass but they don’t ever overpower the effects or dialogue.  It will only happen if it is meant to for that particular moment.  The fighting scenes are a bit more visceral with the actors colliding and groaning after taking a hit as well as throwing one.  The dialogue is clean and prioritized well.  The gunfire is mostly suppressed which is like a rule in a spy movie so that makes sense.  As for movement, the sound field is constantly having objects move or the main person in the frame move.  One of the other impressive parts of the mix is where say Lorraine is in a car chase, the sound moves like the camera is the object in motion.  Its very cool. -Welcome to Berlin: The filmmakers look at the city setting and how it is very much a character in the film.

-Blondes Have More Gun: This has Theron discussing the attraction to the character and some of the training she had to do for the role.

-Spymaster: This runs down Director David Lynch and his ability.

-Anatomy of a Fight Scene: This has a PiP feature of how the various scenes were brought to the screen.

-Story in Motion: This shows how the storyboarded were used to make the scenes come together. ATOMIC BLONDE is groomed to be a contender for spy movies like anything 007 or KINGSMAN.  Lorraine is here to ruin your day if you cross her.  Its fun, action packed, and has a killer soundtrack.  The 4k UHD makes this movie look stellar and the Blu-ray is no slouch either.  Both have a strong picture and make the movie look good.  The audio is well mixed, has some very heavy bass and an immersive quality on either the 4k UHD or the Blu-ray.  The bonus features are pretty good by letting you know some of the techniques used to make the movie.  Overall, I highly recommend picking this one up.  It will make the Charlize fans happy, the action seekers, and the lovers of spy films.  You won’t be disappointed.