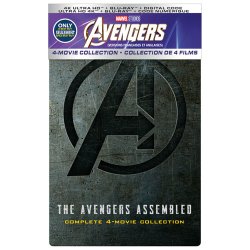 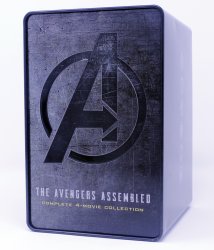 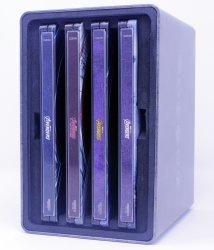 Anybody who purchased this set (whether it was damaged or not and wants to keep it) may as well call Best Buy Customer Service and complain that it's damaged. You might as well get a 15% refund.

I wonder, if a lot of people refuse to accept discounts for damaged sets and choose to return them instead, if later down the line the returned steelbooks will eventually be repackaged with J-cards and re-released for individual sale.

With all of the damages between Best Buy Canada and the U.S (the U.S. has a lot of damaged sets in their stores) there could easily be enough steelbooks for individual sales.

I still don't know what to do about my set(s).

OK so I decided to open up the one with the biggest and most obvious dent which is on the front (or is it the back?) right under where it says "Complete 4-Movie Collection".

I haven't seen this mentioned anywhere yet (maybe I just missed it?) but the steelbooks inside are actually individually sealed! and they don't have J-cards so the fronts and backs are clearly visible. Not that there is really anything to see on the backs anyway but at least you can see if there are any dents or scratches.

OK so for you digital code enthusiasts there are 4 separate digital codes (1 for each movie) all on 1 single card.
The best part is that the card is inside the case and not sealed inside any of the steelbooks. You can have your digital downloads without unsealing the steelbooks.

So the steelbooks for Ultron, Infinity War and Endgame in this set that I opened are in perfect shape. Avengers has a very faint spine slash which might not have been noticeable if the shrinkwrap at that spot wasn't slashed as well.

The padding is probably the best kind of padding there is. It's firm, sturdy and has that nice soft suede feeling and holds the steelbooks quite snug. If you were to turn the stand over the steelbooks would not fall out even if you held it that way for days.
Think of a Dairy Queen Blizzard when they turn it over for you to show you that it won't fall out.

So I can't believe that I'm going to be that guy, because I love glossy steelbooks, but after seeing pictures of the embossed Avengers steelbook from the past (and owning the WWA Ultron embossed steelbook) I have to say that these steelbooks do indeed seem...well...flat. Titles on the front would have helped the art. Now of course I'm looking at them with the very tight and pristine shrinkwrap still on them so I don't know how much of a difference that makes. But something I have suspected for a long time may have finally been confirmed:

I believe, most of the time, that the front of a steelbook looks better sealed with the J-Card attached.

There it is! Yep. I said it. Most of the time I find that a nicely designed J-card with its title, that doesn't cover up any significant part of the steelbook art, (especially now with more and more steelbooks not having a title on the front and no bossing) compliments a steelbook really well. These Avengers steelbooks would look better sealed with a J-Card.

I feel so much better now that I have finally confessed.

Stygian said:
I believe, most of the time, that the front of a steelbook looks better sealed with the J-Card attached.
Click to expand...

To some extent I agree with you but this only applies to title less art design such as the "Infinity War" WWA and never ever does a Steelbook look better sealed with shrink wrap on than nude and without it!
Reactions: Leafs17, CleverLoginName and Stygian

So after re-examining the sets that I received I now realize that what dents are there are rather insignificant. They are more like tiny dings really. I wouldn't want them on a steelbook but on this kind of stand I guess they're actually fine.

I had already made up my mind to open up a set if I decided I was going to keep one because that was the only way I was going to be able to actually see my steelbooks since the steelbooks are hidden by the information card when sealed.

I opened up the worst of the 4 sets (I knew I wasn't keeping this one) which has a slight dent 2 centimeters long but only about a millimeter deep (if it's even that deep) just to get a look at the contents. I was fully expecting to find 4 unsealed steelbooks which is the way I wanted it to be so I could see the insides and discs (I've seen pictures but still...)

Each 4K steelbook works out to be $27.41 after tax. Since I don't use digital codes perhaps I could sell those for a further discount.
I'll have to look up what other people are getting for them I guess. So I guess it would be worth it to keep this set.

So the only question for when I open my set is this:

Now that I've seen the steelbooks, can I get myself to unseal them?

Thank you for allowing me to use this space to figure all of this out.
It's been very therapeutic.

Called Best Buy and got my 15% off each set which still includes the option to return them if I so choose.

I used a 15% off from a previous release on my 3 copies. Now I was offered another 15% off the order.
Reactions: Stygian

I thought my set arrived today considering the size of the box, but got a little surprise from Best Buy Canada instead:

Shadow of Light said:
I thought my set arrived today considering the size of the box, but got a little surprise from Best Buy Canada instead:
Click to expand...

What is Best Buy Plus?

Leafs17 said:
What is Best Buy Plus?
Click to expand...

Their new rewards program that replaces the old Best Buy Reward Zone. I got an invitation about 1 or 2 months ago to join, but never got any confirmation of anything after that. Today, this arrived in a box full of blue confetti.
Reactions: Drum18 and Leafs17

Shadow of Light said:
Their new rewards program that replaces the old Best Buy Reward Zone. I got an invitation about 1 or 2 months ago to join, but never got any confirmation of anything after that. Today, this arrived in a box full of blue confetti.
Click to expand...

I can't find ANY info about it on the internet.

Leafs17 said:
I can't find ANY info about it on the internet.
Click to expand... I am late in the party, but I just took mine out of the pathetic bubble mailer and found couple dents. They're not bad, but it's absolutely ridiculous Bestbuy ships the package with such shitty material. I order one steelbook and they put it in a box where it could have 6 in it. I know this one has a non-conventional dimension, but it shouldn't be an excuse to disregard the care it requires during transport.

Welp ... got mine today and it also came in the bubble mailer. There are dents on this box for sure. They aren't absolutely horrible, but still, the idea of NOT shipping this in a box makes no sense. Best Buy customer support will be getting a phone call from me for sure tomorrow morning.

The steelbooks, however, look to be in pristine coniditon.

So I just checked eBay. Apparently the folks in the U.S. go daffy for digital codes. An auction just completed for these codes and sold for $94 Canadian. That's just crazy!
Reactions: AcIDc0r3

OK I need information on digital codes. I have no idea how they work or what services are available in Canada, if there still are any.
Do Marvel/Disney codes from Canada work in the U.S.?

I have no use for my codes so I plan to sell them but I'd like to know how somebody buying them would go about redeeming them.
I'm sure they would probably know how if they are buying them but still.

After all, $90 is more than half of the cost of the whole set after the 15% discounts we received.
F

Stygian said:
So I just checked eBay. Apparently the folks in the U.S. go daffy for digital codes. An auction just completed for these codes and sold for $94 Canadian. That's just crazy!
Click to expand...

do you know if these codes redeem in HD or 4K?
S

Fork said:
do you know if these codes redeem in HD or 4K?
Click to expand...

Almost certainly in 4k. And **** for 90 bucks, I should probably open mine and sell the digital code. I’ll never use it. Wasn’t planning on opening it, but that’s more than half what I paid.
Reactions: Stygian

Steely-Booked said:
Almost certainly in 4k. And **** for 90 bucks, I should probably open mine and sell the digital code. I’ll never use it. Wasn’t planning on opening it, but that’s more than half what I paid.
Click to expand...

The digital codes are on 1 single card and separate from the steelbooks. The steelbooks are individually shrinkwrapped and can remain that way.
Reactions: Steely-Booked
F

Steely-Booked said:
Almost certainly in 4k. And **** for 90 bucks, I should probably open mine and sell the digital code. I’ll never use it. Wasn’t planning on opening it, but that’s more than half what I paid.
Click to expand...