DISC 1 - CHILDREN OF THE CORN (BLU-RAY / 4K UHD BLU-RAY)
- Brand new 4K restoration from the original camera negative by Arrow Films
- Audio commentary with horror journalist Justin Beahm and Children of the Corn historian John Sullivan
- Audio commentary with director Fritz Kiersch, producer Terrence Kirby and actors John Franklin and Courtney Gains
- Harvesting Horror: The Making of Children of the Corn – retrospective piece featuring interviews with director Fritz Kiersch and actors John Franklin and Courtney Gains
- It Was the Eighties! – an interview with actress Linda Hamilton
- Return to Gatlin – brand new featurette revisiting the film’s original Iowa shooting locations
- Stephen King on a Shoestring – an interview with producer Donald Borchers
- Welcome to Gatlin: The Sights and Sounds of Children of the Corn – an interview with production designer Craig Stearns and composer Jonathan Elias
- Cut from the Cornfield – an interview with the actor who played “The Blue Man” in the fabled excised sequence
- Theatrical Trailer
- Disciples of the Crow, a 1983 short film adaptation of Stephen King's short story

DISC 3 - CHILDREN OF THE CORN III: URBAN HARVEST (BLU-RAY)
- Two versions of the film, the R-rated US Cut and the Unrated International Cut with extended ending (via seamless branching)
- Brand new audio commentary by critics Matty Budrewicz and Dave Wain
- Corn in the City, a brand new interview with screenwriter Dode Leveson
- Corn in the USA, a brand new visual essay by author and critic Guy Adams
- Early treatments, versions of the story from the development process
- Stills Galleries
- Theatrical Trailer

DISC 2 - CHILDREN OF THE CORN II: THE FINAL SACRIFICE
Two versions of the film: the International Cut, and the US Theatrical Cut
Workprint version of the film

Nice looking set but not sure I want to spend that much on just the original in 4k as don't really care much for the other 2.
M

Robles said:
Nice looking set but not sure I want to spend that much on just the original in 4k as don't really care much for the other 2.
Click to expand...

I'm a huge fan of the Children of the corn films! Been waiting for Arrow to put out a 4k release of the first movie but this boxset is even better. Ordered!!

Where, very quick search on Arrow site did not find any ? Thx !

Space Cadet said:
Where, very quick search on Arrow site did not find any ? Thx !
Click to expand...

It's a US exclusive at the moment. Here are the links:

The UK gets the exclusive box set with the first film in 4K UHD & Blu-ray and the 2nd & 3rd film on standard Blu-ray
Reactions: MM3 and Space Cadet

Flloydo said:
I saw the image first and got excited for some kind of Arrow Led Zeppelin release
Click to expand...

Yeah, that is my avatar. I don't know why it's showing that as the thread image.
Reactions: Flloydo

nutcaseshy said:
Yeah, that is my avatar. I don't know why it's showing that as the thread image.
Click to expand...

i think you can edit the OP to show the image as the thumbnail. Otherwise it will just be that persons avatar

Yeah I saw it, I also quite like the slip on that release.
Problem is with it being a US/CAN only release it ends up working out quite expensive.
I might just hold out and see if we get the single release here at some point.
Reactions: Space Cadet and MM3

Is there a reason why still tons of Arrow releases from May onwards are not available on Amazon.co.uk for non UK people? Other labels are totally ok. 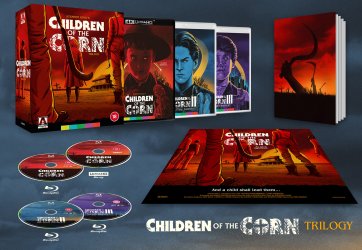 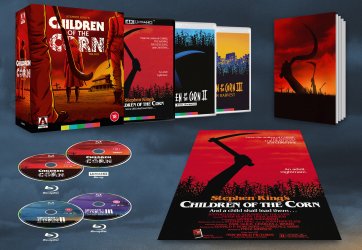