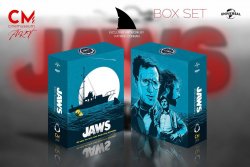 I asked for an update re OUATIH and Jaws.

Between March and April 2023 I suppose
Reactions: WKRP and hatredhorror

In response to @BluSteel2012 regarding the Jaws slip he linked, That's a pretty nice set! I'm assuming they have those cards contined within the amray? My buddy bought me an overseas Jaws with a slip I'd not seen. It wasn't this slip, but I'm thinking I need to open it to see if anything is inside. lol.
Reactions: BluSteel2012

- JAWS CMA#23: We are preparing the executive files for printing, but as for CMA # 21, we have to wait for the reissue of the 4K discs for the Full Slip version for distribution passage of the Universal catalog to Warner Bros Italy. There is no official release date at the moment.
Reactions: jaws finatic

What does that even mean?
Reactions: jasong

DMD4k said:
What does that even mean?
Click to expand...

The CMA #21 is OUATIH. There's an update about that saying that Sony switched distributors from Universal to Eagle Pictures or something. I take it that is holding up Jaws and they're waiting on a release date from Universal. But who knows?

The 50th Anniversary will be on us before we know it. Timing is key with these editions. I'm a JAWS NUT for sure, so if and when it shows up I'll be happier than a resurrected Quint, but the excitement about it is pretty much turned into exasperation. Once in hand I'm sure I'll be happy with it. Item specific updates would be cool. As would knowing what is included in the set, the specifics of which are still unknown, at least to my knowledge, or lack thereof.
Reactions: Shark, jasong and maygear

I ordered this four months ago.. this is getting a little ridiculous.
Reactions: Shark and jaws finatic
A

Sono2020 said:
I ordered this four months ago.. this is getting a little ridiculous.
Click to expand...

I ordered 9 months ago...you must have an abundance of patience with them. Paid and waited 13 months for another of their releases...think it was the Shining. Really love their stuff but it can be super frustrating. Have a bunch on preorder in group buys where don’t have to pay until ready to ship...will never order direct from them again.
Reactions: jaws finatic and Shark

I guess this is going to be a bummer, because I don't know how long it's going to take for Warner to re-issue everything from the universal catalogue. Not sure this is to be solved in just a few months, right?


I ordered this four months ago.. this is getting a little ridiculous.
Click to expand...

aj101097 said:
I ordered 9 months ago...you must have an abundance of patience with them. Paid and waited 13 months for another of their releases...think it was the Shining. Really love their stuff but it can be super frustrating. Have a bunch on preorder in group buys where don’t have to pay until ready to ship...will never order direct from them again.
Click to expand...

Alright, Ninja's, this is not a contest.

What is confusing by Cine's statement is are we also on hold for the Jaws? Initially it seems like that is good to go, and only #21 is at issue, until the last comment.
Reactions: maygear

There's been time to have a kid since preorder, so what do you think? Not that you should be surprised.
I'm sure we'll get the all time favourite sendoff your patience will be repaid with the best quality

There was a time when you ordered a Blufans and it took between 6 months and year to get it.
this isn't unprecedented. Annoying, sure - but not unprecedented.
.
Reactions: DMD4k

There was a time. But that time isn't now.

DMD4k said:
There was a time. But that time isn't now.
Click to expand...

Waiting isn't a big deal. Unless it's gift that is time sensitive.

It is already a PITA when you're waiting for months for a preorder or whatever. But when the money has actually left my account months ago, that's no longer a pain, it's downright unacceptable. And yes it's a gift, to myself!!
Don't get me wrong, I can wait as much as the next guy, but why should I have to? Other retailers are capable of keeping the time from taking my money to releasing the product to much shorter time periods. Why must CM be excused?
Who the hell is gathering their card stock so meticulously that it takes ages to release anything? Blind nuns in the amazon? There's nothing they're doing different, in terms of quality, than other retailers to warrant 3-4x the delay.

They had a few weeks(/months?) where they didn't take any preorders and I thought ok... they are listening, finally! And they started shipping out year old preorders, The Shining and another 1-2 releases, correct? I've only been half following it so correct me if I'm wrong (but I don't think I am).
After that releases have not continued at that same pace, shocker, and preorders have resumed. Back to square 1.
Reactions: jaws finatic, CleverLoginName, MajimaGoro and 1 other person

I don't think you can compare them to others. They are a smaller operation. And the pandemic certainly hit Italy harder than most.
so maybe that had an effect on getting materials. But they are a smaller operation, not unlike Plain Archive (who have all but disappeared). I totally get the "I paid for a service, I should get the service" angle. It just doesn't bother me that waiting is a part of the deal. *don't start collecting Hot Toys or Sideshow figures - the average time from order to delivery is a year.

but I get why people get frustrated....
Reactions: steelmybeatingheart
Show hidden low quality content

Blu-ray SteelBook Today at 4:48 AM
Flloydo