Release date: November 15, 2019
Purchase link: Best Buy
Price: $549.99
Notes: Includes all 23 MCU films on Blu-ray and 4K UHD discs, an exclusive bonus disc, a Matt Ferguson lithograph, and a letter from Kevin Feige (no word yet on whether the autographs inside the set are real, but likely not). Last edited by a moderator: Oct 5, 2019
Reactions: Mararagan, ChoppedUp, Drum18 and 2 others

This thing is freaking insane! I so wish I could afford to get it. Heard on Facebook that it’s limited to 3500 too.
N

I wish they would do a phase 3 collector's edition! I need something to go next to My briefcase and orb.
Reactions: DADDYCOOL187, Grendel, MM3 and 1 other person

Nova said:
I wish they would do a phase 3 collector's edition! I need something to go next to My briefcase and orb.
Click to expand...

I think this is the best that you're going to get. Phase 3 was just too huge for one CE.
N

tridon said:
I think this is the best that you're going to get. Phase 3 was just too huge for one CE.
Click to expand...

They should just do a life-size Guantlet that houses everything.
Reactions: MM3

Its innovative thats for sure. and im a sucker for art on spines that match up .... but always sitting at that angle cause of how its cut is kinda weird. Most collectors will get the best real estate foot print by putting on top of a rack. However with that angle you likely cant. Tho if you have ikea billy bookcases you likely can ..... tho then its so high up the angle facing upwards you dont know whats on display up there. ha.

I think this could end up a case of design being top notch but not as practical to those most hardcore physical media folks ... which in turn is exactly what a $500 + set is geared towards, those folks! I'm sure it will look great tho every time you pull it out for that one shot to flex on social media lol ..... but for $500+ I need that baby on permanent display not tucked away in the cabinet/cupboard.
Reactions: Grendel, Robsonmonkey, ash333 and 3 others
B

tridon said:
I think this is the best that you're going to get. Phase 3 was just too huge for one CE.
Click to expand...

Am I right in saying that Best Buy never sold the limited editions of phase 1&2? Was only amazon? I have them two editions and they are great.
And as uk has taken out phase 3 part 1 and 2 to come I feel jb hifi will do same with part 2 as well. Ok they are not as good as the two editions sold by Amazon but they still might do a set to house phase 3 part 1 and 2 or even the ultimate complete set different to this.
If this is it then it's a bit of a let down to be honest and most should hold off ordering till a big price drop if Amazon come up with same edition.

I'm not getting it at that price point, that's for sure.

I would pay that price if that letter from Kevin Feige is hand signed as are the signatures on that box cover
Reactions: Robsonmonkey and ty233

For such a huge event this is pretty lacking, especially for the price. I thought they'd have little trinkets or replicas of things found across the entire Infinity Saga, hell mayhbe the Infinity Stones or something. Not to mention the disc slips are just the titles of the films with a boring ass coloured background.

Oh and no offence but why is Matt Ferguson on everything for these Marvel films, his art is okay but I thought that being such a big collection they'd have hired a comic book artist who's done The Infinity War comic or the Infinity comic saga

I mean the Litho AND the spine artwork is exactly the same, it's lazy.
N

Surprisingly Martin Scorsese is not a fan of these movies,
"I don't watch them. I tried, you know! But they are not cinema .... Honestly, the thing I consider closest to that kind of films, no matter how well they are made and boast of actors who do their best despite the circumstances, are the funfairs .... It is not cinema, made up of human beings who try to transmit emotional and psychological experiences to other human beings"
(Multiplayer.IT - 04/10/2019)
S

Wreck said:
I'm not getting it at that price point, that's for sure.

if you preorder and it doesn’t sell out, just return it. You’ll have till after Xmas to do that and by then, we’ll know the print run. Just giving you guys an excuse. I’m not sue I want to do this, even though I can afford it. I’m sure I would not open it. I do like the outside cover, but it’d be better if the actors actually signed them (it’s not like they got anything else to do while lounging by their pools counting their Marvel bucks

I wonder if it could indeed stand straight up .... I kinda think it may be possible. Maybe even more so with the lid on...

Here's a larger image (obviously you need to click the thumbnail) if y'all want a closer look... 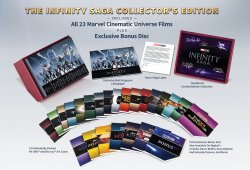 3,500 copies? Can pretty much guarantee they're photocopy signatures and not real ones. If they were real, I'd be all over this, but they're not, so.... no thanks. Prefer one steel of each movie, which I've probably spent way over £1,500 on. Just going to cry myself to sleep thinking about that amount.
Reactions: Grendel, Noodles and Mararagan
A

i'm good with my steelbooks for now. was planning on buying a new tv and a nvidia shield that day.

if i did get it i'd definitely put it on a card and keep it sealed for a while.
V

davhyl said:
3,500 copies? Can pretty much guarantee they're photocopy signatures and not real ones. If they were real, I'd be all over this, but they're not, so.... no thanks.
Click to expand... Same thing happened with ALITA: BATTLE ANGEL Collector's Edition: with that release Amazon's listing was truthful . . . could be argued that the print on the box suggests different:- What a Strange boxset??? This is meant to be the "Ultimate" edition… but kinda feels a miss… especially with that angled box…?